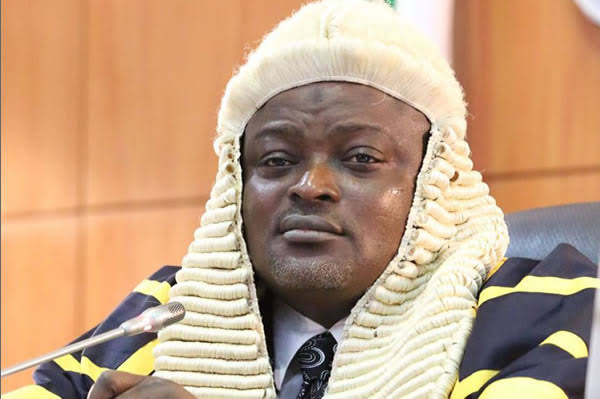 Says “The journey to Oduduwa Republic is advancing fast, and we already have good reasons to start congratulating ourselves

A Renowned Historian and leader of the umbrella body of Yoruba Yoruba Self-Determination Movement, Ilana Omo Oodua, Emeritus Professor Banji Akintoye, has hailed the Speaker of Lagos State House of Assembly, Rt. Hon. Mudashiru Obasa for speaking truth to power, saying his comment warning the Nigerian Government against the use of Force to thwart Yoruba Self-Determination Activists agitating for the emergence of Yoruba Nation from Nigeria has helped to lift and boost his morale.

The 86-year old Ado-Ekiti Born former Senator called on other ruling and non-ruling Elites of Yoruba Descent to emulate Obasa by start speaking truth to power without a dint of fear in defense of Yoruba Land and the emergence of Yoruba Nation, saying “our elites have more to gain in Yoruba Nation than living in fear under the Nigerian government”.

In a statement personal signed by him and made available to Newsmen on Friday by his Communications Manager, Mr. Maxwell Adeleye, Akintoye warned the Nigerian Government against the Use of Force to quench the agitation for self-determination, warning that any Nigerian Leader who dare to order shooting of Yoruba Self-Determination Activists will have a date with the International Criminal Court.

He advised that rather than threatening war against people exercising their fundamental human rights in a peaceful manner, the Nigerian Government should call for dialogue on how to peacefully dissolve the almagamation of 1914 of the Southern and Northern Nigeria so that both regions can continue to collaborate peacefully as Sovereign Countries.

Urging the Yoruba people never to be deterred or intimidated, Akintoye stated that “the journey to Oduduwa Republic is advancing fast, and we already have good reasons to start congratulating ourselves”

The statement reads: “This statement by Rt. Hon. Mudashiru Obasa is about the first forthright statement by any Yoruba highly placed public official on the issue of self-determination. Rt. Hon. Obasa has not only spoken truthfully; he has demonstrated unusual boldness.

“His comment has helped to lift and boost my morale to keep marching like a valiant soldier in the journey to Yoruba redemption. The vast majority of Yoruba people are thanking and praying for Hon. Obasa today for speaking truth to the Nigerian Government.

“We ask all our other public officials, politicians and the Yoruba elite to pick up courage to emulate Hon. Obasa now. It is their sacred duty to their Yoruba people, and they stand to receive great blessings by faithfully doing standing by their people.

“The overwhelming màjority of the people of our Yoruba nation have made it absolutely clear that we Yoruba now want to assert our self-determination, sepparate our nation from Nigeria, and go forth to run our own Oduduwa Republic or Yorubaland, a country that will be highly respected in the world for its security, limitlèss opportunities for all our citizens and all law-abiding foreign residents among us, and eminent respect for human life and human dignity – a land of order, law, wealth and prosperity.

“Seeking all these is entirely our right as a people. We have embarked on the journey to our goal, there is no looking back, and nobody can force us to give up.

“Many other nationalities in Nigeria seek to assert their self-determination too, and we have announced our willingness to work with them as co-travellers seeking identical goals. The journey is advancing fast, and we already have good reasons to start congratulating ourselves.

“We need to warn the Nigerian authorities who say they are determined to thwart our quest. You cannot stop us or any of the other nationalities seeking self-determination. When you say you have ordered the Nigerian police and military to be ruthless against us, we advise you to be aware that you might be breaking laws that cal lead you into serious criminal prosections in international criminal courts.

“We Yoruba do not wish such a fate for any of the persons who are until now our co-ctizens. The truth is that you cannot stop any nationality that is presently part of Nigeria from asserting their self- determination.

“The United Nations Constitution, various United Nations conventions, the United Nations Declaration of the Rights of Indigenous Peoples, convetions of the African Union, all lay it down that every nationality in the world, large or small, have the inalienable right of self-determination . Nigeria is a signatory to all these laws, and therefore, these laws are all part of Nigerian laws.

“Our ultimate advice to Nigeria is that negotiations be embaked upon now to enable the departures from Nigeria to be be negotiated in peace and in the spirit of brotherliness, so that as different countries, our nations may live as friendly neighbors in all our future. The Nigerian federal government has a duty to humanity to lead us to such negotiation”, he said.