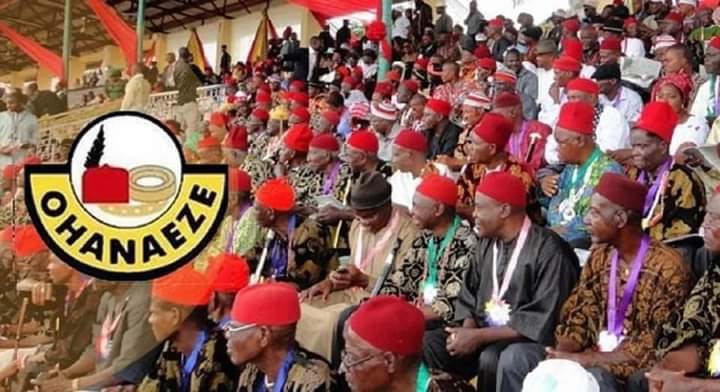 The Ohanaeze Ndigbo worldwide has appealed to the Southeast Governors’ Forum to put behind whatever grievances they hold against Mazi Nnamdi Kanu, the leader of the Indigenous People of Biafra, IPOB.

In a statement by Mazi Okechukwu Isiguzoro, Secretary-General, Ohanaeze Ndigbo Worldwide, he pleaded with the governors to forgive Kanu and push for his freedom.

He said the governors should look at the bigger picture of the consequences that would come wuth the prolonged incarceration of Kanu.

Ohanaeze said the obedience of Igbo youths to Ohanaeze’s earlier advice to shun any form of protests and processions across the region, should not be taken for granted.

The Ohanaeze scribe cautioned that, “We can no longer afford to keep his supporters from hitting the streets immediately after his retrial starts.

“This is not the time for accusations and counter-accusations. We appeal to southeastern Governors to explore the harmonious relationships between them and President Buhari to secure a soft landing for the detained IPOB leader for the sustainability of peaceful atmosphere that just returned to the zone”.

He added that, “the previous Nnamdi Kanu’s rantings and insults heaped on southeast Governors and Igbo elders were unbearable but the best way to forgive Nnamdi Kanu is to secure his release.

“We have implicit confidence that the continuous silence of the Governors is golden, as backstage activities and negotiations are going on quietly without much noise, as what is required now is the release of Nnamdi Kanu through out of court settlement.”