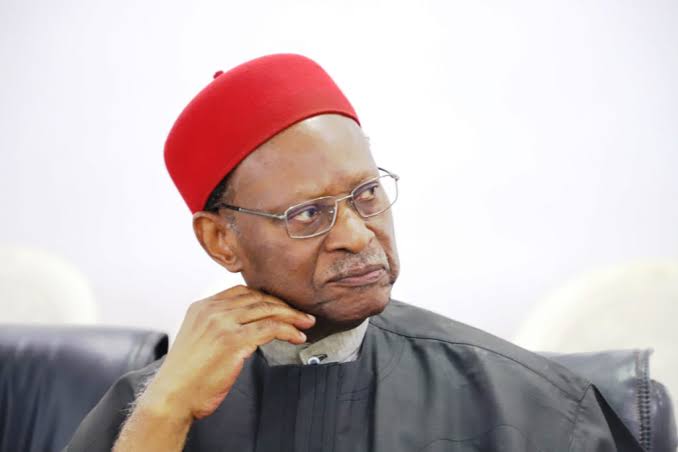 Former secretary general of the Commonwealth, Emeka Anyaoku, said the current state of affairs in Nigeria was pushing the country to the brink of disaster.

Mr Anyaoku said this at the 10th edition of the Emeka Anyaoku Lecture Series on Good Governance, organised in his honour in Awka on Thursday.

The former diplomat, who hails from Obosi, Idemili North Local Government Area of Anambra State, said he had to break his over 10 years resolve to be away from public glare because Nigeria was fast drifting away from the dreams of her founding fathers.

“Developments in this country are pushing Nigeria to the brink of national disaster,” he said.

Mr Anyaoku, 88, decried the degeneration of the country into “international irrelevance” and the slide into the ranks of poverty-stricken nations.

He said the level of deterioration had robbed Nigeria of the desired respect and the much needed sense of belonging by her citizens.

Apart from mass abduction of citizens, bandits operating around northern Nigeria have carried out deadly attacks on Nigeria’s security agencies, including the army.

Seven soldiers were killed in July, for instance, when some bandits ambushed the Nigerian troops in a village in Kebbi State.

Mr Anyaoku expressed worry over the recent assault on a Nigerian diplomat in Jakarta, Indonesia, noting that such a development indicated the ignominy with which the rest of the world now treat Nigeria.

Mr Anyaoku recalled that in their heydays in diplomatic circles, such an odious treatment could not be imagined. He recalled how as a young assistant serving in Nigeria’s embassy in the U.S, in the 1960s and early 1970s, almost every state in the U.S. craved his audience.

In his speech at the event, Governor Willie Obiano of Anambra State said this year’s edition of the lecture came at the right time in the political history of the state.

Mr Obiano said Mr Anyaoku was an exemplary public servant who led the world body well in spite of the organisation’s diversity.

He said as a governor, he had always drawn inspiration from the towering legacies of Mr Anyaoku in public service and that the least he could do was to offer good leadership to the Anambra people.

“We have also come under the powerful influence of the ideals and philosophies that formed the foundations of his entire life’s work and remarkable career that changed the interface between nation states.

“This event could not have come at a better time. Anambra is on the brink of change. A serious political whirlwind is blowing across Anambra State at the moment.

“I have no doubt that a lecture on leadership and good governance will help to remind Anambra people that their number one consideration should always be about which party and candidate would give us good governance.

“He was 30 years old then. Instructively, that marked the curve in a historic career that has inspired successive generations across continents, cultures and religions. That is the true meaning of impact.

“Here in Anambra State, my team and I have made great efforts to carry the lamp of excellence which Chief Anyaoku had lifted very high on the international stage with dignity and honour,” he said.

Also speaking, Donald Duke, a former governor of Cross River State, described Mr Anyaoku as a gift from the Obosi people to Anambra, Nigeria and the world.

Kingsley Moghalu, the guest lecturer at the event, called on Nigerian leaders to sit up and deliver good governance to the people.

Mr Moughalu, a former deputy governor of the Central Bank of Nigeria, stated that leadership, not politics, was the main driver of a nation’s progress.

He added that the absence of leadership and sense of responsibility to the followers was the cause of the general lack of good governance in Nigeria, noting with concern the obsession with exacting power and interest in building of cliques and a clan of loyalists, against interest in competence, as the cause of misrule in the country.

Other speakers at the event included former Bayelsa senator, Ben Murray-Bruce, and Hope Eghagha, a professor and lecturer at the University of Lagos.