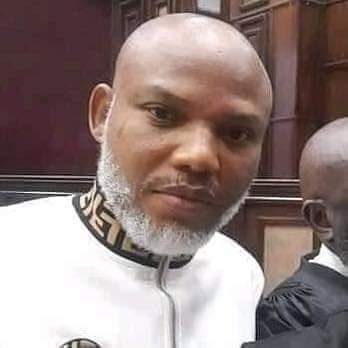 Leader of the Indigenous People of Biafra (IPOB), Mazi Nnamdi Kanu, has asked the Federal High Court to recuse itself from the case of terrorism and treasonable felony proffered against him on the grounds that the Court lacks jurisdiction to try his case.

The Government had amended earlier charges brought before the court, presenting a seven-count charge against him.

Kanu insisted that the trial ought not to take place at all since most of the crimes were committed in the United Kingdom, where the Court has no Jurisdiction over him since according to him, the UK has its Judicial system.

This was stated in his notice of preliminary objections filed by his lawyers.

The following are excerpts from the preliminary objections his lawyers filed.

“…That I know as a fact that the United Kingdom (of which London is the capital), is a sovereign state under International Municipal Law and has municipal laws punishing criminal offenses.

2) That I also know as a fact that jurisdiction is extrinsic to adjudication. It is conferred on a court, aliunde. It is not intrinsic.

4) That I also know as a matter of fact that the alleged offenses for which the defendant was charged, do not constitute terrorism offenses in London, United Kingdom, where they were allegedly committed.

5) That I am further aware that there is an obligation on the Attorney General of the Federation to maintain international co-operation for compliance with International Treaties on terrorism.

6) That the defendant was abducted from Kenya and consequently extraordinarily rendered to Nigeria, without firstly subjecting him to extradition proceedings in Kenya; I know as a fact that this is a violation of all known international conventions and treaties on extradition.

8) That I am aware that he who comes to equity must come with clean hands, and no party should be allowed to benefit from his wrongdoing.

9) That I know as a matter of fact, that the extraordinary rendition of the defendant robs the Honourable Court of the requisite jurisdiction of trying the defendant on counts 4, 5,,6 and 7 of the Amended Charge.

10) That counts 1,,2, and 3 of the Amended Charge were brought under a non-existent law.

11) That count 3 of the Amended Charge relates to an offense allegedly committed in Ubuluisiuzor, in Ihiala Local Government Area of Anambra State, which is outside the territorial jurisdiction of the Honourable Court.

12) That I know as a matter of fact that an offense can only be tried by a court exercising jurisdiction over the place or area where the alleged offense was committed.

13) That counts 5,,6, and 7 of the Amended Charge do not disclose an offense known to law.

14) That there is no proof of evidence attached to the Amended Charge filed against the defendant.

15) That even the purported proof of evidence to be relied upon by the prosecution, does not disclose any prima facie case against the defendant.

16) That from the list of exhibits and witnesses attached to the Amended Charge, there is nothing relating to or linking the defendant to the 7-count charge, particularly counts 4, 5,,6, and 7 thereof.

18) That the defendant/applicant cannot be arraigned anew or tried for an offense when the judgment that made a pronouncement on the instrument constituting a state of affairs as such an offense, is the subject matter of an appeal.

19) That it will be most unjust, painful, wicked, and unfair for the applicant to undergo the rigors of a full trial, when the Amended Charge as constituted, does not disclose a prima facie case against him.

20) That there is no ground for this honorable court to proceed with the trial against the applicant in the circumstance of this case.

21) That the court has the powers and a duty to stop a prosecution which on the facts creates abuse and injustice.

22) That it will be in the best interest of justice if the present 7-Count Amended Charge is struck out and or dismissed.

Can’t, therefore, asked the Court whether it has “the requisite jurisdiction to try the defendant on the 7- count amended charge, given the extraordinary rendition of the said defendant/applicant;

“We respectfully urge your Lordship to decline jurisdiction to entertain the instant Amended Charge, as the alleged offenses contained therein, were allegedly committed wholly in London, United Kingdom, and Anambra State, outside the territorial jurisdiction of this Honourable Court, ”he argued through his lawyers.

“The Honourable Court is further urged to strike out and/or dismiss the counts of the charge which are incompetent and brought under unknown provisions of the laws.

“We further urge this Honourable Court to hold that the purported proof of evidence to be relied upon by the prosecution did not disclose any prima facie case against the defendant, that will invoke the power of this Court to set down the case for trial.

“The 7-count amended charge filed by the Prosecution, we respectfully submit, is not only as naked and empty as a worthless paper, but not founded on existing laws, and the court is respectfully urged to, upon a meritorious consideration of the grounds upon which the objection is predicated, and argument in support thereof, to dismiss in its entirety this seven-count amended charge and accordingly discharge and acquit the defendant/applicant on those 7-count charges.”