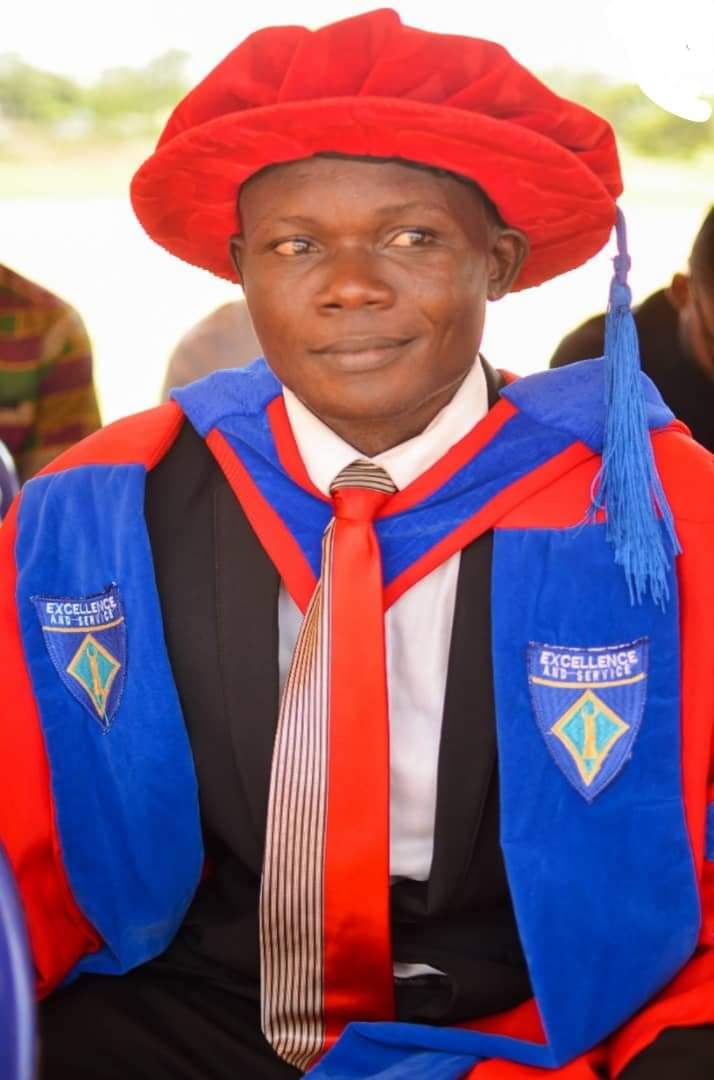 Shortly after this, Dr. Chibueze then headed to community secondary school Ihaohuala in Ihamufu Isiuzor local government area Enugu State where he obtained his West Africa Senior School Certificate in 2005.

He then secured admission into the Institution of Economic Education Thinker College Enugu, in the year 2005/2006 where he read Political Science, Social Studies and graduated with distinction. He equally earned his First Degree in Enugu State University of Science and Technology (ESUT) where he got a Bachelor of Science Education in Political Science, Administration and Supervision in the year 2010 with a cumulative grade average of 4.40.

Without hesitation based on the recommendations offered to him by respective lecturers who taught him, most especially, Prof. Esther Nwosu, who is now retired, Prof. M. C. Amina, who happens to be his 2nd supervisor in his Doctorate Degree Programme, to mention but a few, Dr. Chibueze commenced and completed his Doctorate Degree in the year 2019 in the same department of Educational Administration and Planning with a cumulative grade point average of 4.3. While still in the service of the Nigerian Police Force, he earned his PhD as a police corporal.

His interest is in teaching as contained in his hobbies, particularly lecturing in higher institutions. He also enjoys reading, research, and football. His favorite club is the Manchester United Football Club.

Talking about his career as a police officer, he was enlisted into the Nigeria Police Force in the year 2012 after his university education. He only had to grab the opportunity because unemployment in the land is out of proportion. He was to be enlisted as a cadet officer but not having a ‘long leg’ as we say in our parlance killed that dream. Notwithstanding, he made vigorous and multiple efforts, applied, and passed successfully at the state level. But this dream was however truncated at the zonal level when he was asked if he knows any senior officer, the likes of IGP, AIG, DIG or politically exposed persons who can help him.

To this, he answered, “I told him, I had no one other than God Almighty who bestowed on me excellence in knowledge wisdom, and understanding. Only Him enabled me to excel academically and have my good records.

“Thereafter because I had not to help, regrade could not work. Alternatively, I had already participated for recruitment the same 2010 after my graduation for people with NCE, OND, and HND. Then I was advised by a serving police officer to forget about the shame, upon my higher Education, I should start from the lower cadre”.

Without minding the discouragement, also as someone who was a dedicated, patriotic citizen who was ready to deliver his best to serve his country, and contributes meaningfully to national development, he was enlisted and he completed his course at the Police Training College in 2012.

He was posted to Abia State in 2013, deployed to Abiriba police division. That was actually when he started his journey to PhD programme at Abia State University.

Having completed his education and having bagged his PhD, he made vigorous and meticulous efforts, wrote to various police authorities for the acknowledgment of his academic breakthrough and the need to upgrade him from a recruit to a cadet officer as a way of motivating him. All the effort could not bear any fruit.

He stated further, “When I bagged my PhD in 2019, on 19th December 2019 to be precise, I wrote my first letter, attention was not given. On 9th January 2020 police lawyers had meeting with the Inspector General of Police, after the meeting some of the lawyers and friends who feel my predicament on daily basis told me that the IGP told them that, any interested person with Masters or PhD who wishes to lecture in Nigeria Police Academy Kano State should apply, that such person will be recruited and posted to that place. As a book lover, academician, and researcher, who is willing to perform at a given opportunity, I wrote on 15th January 2020 but my letter was not given attention.”

Thereafter on 20th/24th February respectively, he wrote another letter to the Department of Finance and Administration, Department of Training and Development, and Department of Information and Communication Technology ICT. After praying for God’s intervention that his plight will reach the attention of the Inspector General of Police, as God may have it, after one week, he received a call, and the lady caller asked if he has anybody monitoring his letter, he said no but God, she asked him to call her, so that she can monitor the letter for him.

Then on 9th March, he met a retired Deputy Inspector General of Police, Ivy Okoronkwo. After laying his predicament to her, she placed a call to one CP, Mike, though Dr. Chibueze never knew the said CP, however, spoke with him through DIG Okoronkwo.

He stated, “The woman now explained to him that I have tried and that I need help, he ought to have entered as a carded but no body to help him, the man now asked me if I have the IGP authority for my PHD and I said actually I got my first degree before getting the job but because of my love, dedication, and commitment to my job, I did my PHD as a part-time student and was also placed on permanent night duty base on the arrangements during my master degree before the commencement of my PHd, the man said ok, since I did not indicate so in my previous letter, that I should write to him directly, which I did without hesitation on 9th march 2020.”

Then he included all the necessary documents, indicating that he has gotten his first degree before joining the police. As God may have it, the retired DIG also continued monitoring the letter until Dr. Chibueze was recommended as a lecturer into the Nigeria police academy and as human resource personnel.

She continued to congratulate him. Then in the month of May 2020, it became a great tragedy that he lost his father, who is supposed to celebrate his success after suffering to reach his academic height.

He says, “Then after two weeks in the month of June 10th, I received a call from one SP Solomon from the Department of Training and Development in respect of my letter to IGP and recognition of my PhD and a position as lecturer in the Nigeria Police Academy dated January 2020. He wants to advise me, he asked if I have the IGP authority, I said I don’t know the person speaking with me and the letter you are referring to and that I have so may letters in the office of the IGP and DIG Training and Development.

“He said specifically the one dated 15th January but the former IGP has ordered that it is processed but the problem now is if I have the authority and who asked me to write I should not reply back that if I do the police will query me or default me.

“I asked why will the police query me or default me for which offence, that I went to school for the improvement of myself as an individual, improvement of my organization, improvement of the society, country and of the world globally and then he later told me that I can reply the letter.

“Thereafter I called the woman who has been monitoring my letter informing her about the whole scenario, the woman told me not to mind anyone giving me such information, maybe the person has seen the of recommendation and he’s looking for a means to extort money from me.

“I told her that I rely on her even though I have not seen the letter, eventually the letter got to me on the 10th of July 2020, but dated 19th June 2020, the formal DPO, SSP Kenneth Nwajuwa presently Commissioner of Police who was in charge of the division where I work as the division intelligence officer, saw the letter and was mad.

The DIG for Training and Development ordered me to avail them with the IGPs authority for my PhD studies that it will enable them to facilitate my letter, on 14th of July 2020, I replied the letter with its attachment that I have gotten my first degree before I was enlisted into the Nigeria police force.

“Secondly that I had my Masters and PhD under part-time studies and because of my love and commitment and dedication I have for the job and as a patriotic citizen ready and able to serve the country at any given time to the extent that since I have started my police work, I have not gone for any annual leave, to show commitment and how I have been performing my duty professionally.

“In furtherance, I added that I earned my PhD as a self-financed program and self made effort and also there’s never a time of study collided or hindered with my job or prevented me from performing my duty professionally or excellently. As an educational expert, I still plead I should be moved to the above-mentioned institution so that I will be reciprocating in the area I will be functioning and be an asset in that area. It is good that when one combines what he or she acquires, one will be able to see the effectiveness and efficiency of any individual a product to take place.

“In addition I am 100% ready to transfer my service to any organization especially academic institution for the purpose of teaching, reading, researching so that I will continue to function effectively.”