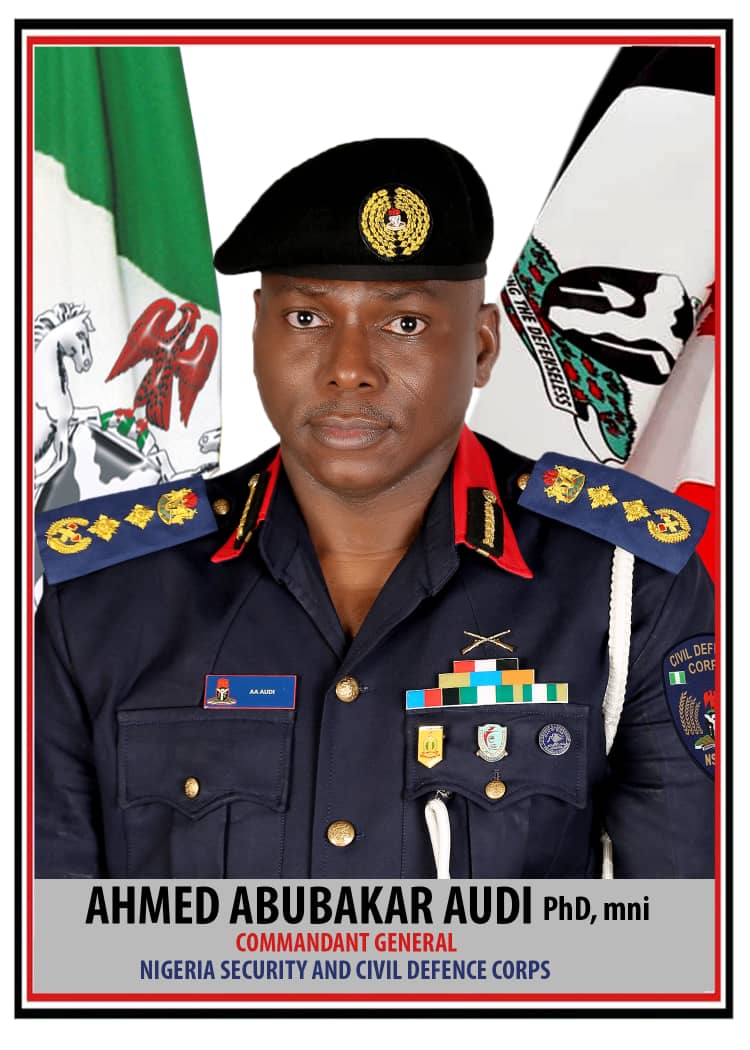 The Management of the Nigeria Security and Civil Defence Corps under its present Commandant General, Ahmed Abubakar Audi, PhD, mni, places high premium on the welfare of personnel, knowing undoubtedly that to build a virile, dynamic and productive workforce, conscious efforts must be made to motivate the staff towards putting in their best for more dedicated service.

In view of the above, the Commandant General who is barely eight months in office, has stressed that he will leave no stone unturned to ensure high welfare packages for officers and men of the corps through a robust and well-structured plan to increase personnel morale.

According to Audi who has stressed it in different fora that his roadmap for the Corps cannot be compromised having established the template of his planned thoughts and possible action to follow in line with his avowed commitment to initiate programs that would benefit the entire personnel and not a section of the Corps like the cooperative members only.

It is worthy of note that within eight months of his assumption of leadership of the Corps, the Commandant General has ensured the promotion of officers and men who have remained on same rank for 3 to 10 years, he began processing the payment of the backlog of promotion arrears of personnel which was meant to have been paid by the last administration and gave special promotion, awards and commendation letters to officers who distinguished themselves in line of duty within his 100 days in office.

In furtherance, Dr Audi gave out cheques of over two-million-naira (N2M) for Group Personal Accident benefits to personnel who sustained various degrees of injuries in the cause of discharging their duties. Not to mention the over twenty-million-naira (N20m) worth of cheques being distributed as part of payment for Group Life Insurance which is managed by the Head of service.

In keeping with his promise, the Commandant General has paid over 150 families the outstanding burial benefits and entitlements of deceased personnel long forgotten before his appointment as the CG to the tune of Forty million naira (N40m) while also working assiduously to pay the backlog of outstanding benefits of about 60 families to the tune of over two hundred million naira (N200m) which has been lingering since 2013. Ongoing is the second phase of compilation of remaining personnel that has sustained injuries in the cause of discharging their duties and about 60 officers and men will be paid not less than twenty-one million naira (N21m) as Group Personal Accident Benefits.

In spite of all the above efforts however, some media houses are still been coaxed into circulating an ill-conceived story about an independent arrangement of the NSCDC cooperative society to distribute tricycle to interested members with a view to portraying the administration in negative light and also to cast aspersions on the efforts of the Audi-led administration.

To set records straight, the cooperative society is an independent body whose membership are voluntary and not mandatory. The alleged scheme was meant for only interested cooperators and it was introduced by the cooperative society as part of effort towards meeting the welfare needs of its members only and not the generality of personnel which the CG is responsible to, hence, the need to correct this misrepresentation as the Commandant General cannot dictate what cooperative do with their money, but can only counsel them which he has ensured.

Commandant General therefore appeals for patience and understanding of personnel on matters affecting them, he restates his determination and willingness to accommodate complaints on issues affecting all staff irrespective of cadre and treat same based on justice, equality and fairness and anyone with complaints should not hesitate to follow the appropriate channel to forward it.

While appreciating the partnership between the corps and media, he advised practitioners to leverage on the existing relationship to seek clarifications on issues relating to the corps and publish same bearing in mind their social responsibility role.