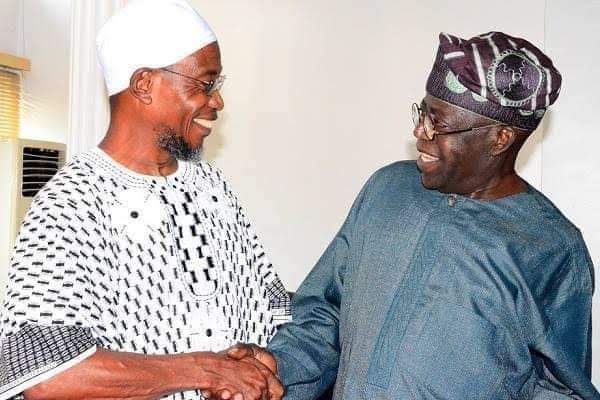 The National Leader of the All Progressives Congress, Asiwaju Bola Ahmed Tinubu, has congratulated the Minister of Interior, Ogbeni Rauf Adesoji Aregbesola, on his 63rd birthday.

Tinubu commended him for his pioneering inspirational leadership in Osun State and for his continued service to Nigeria. In a statement congratulating him on his 63rd birthday issued by his Media Office and signed by Tunde Rahman, Asiwaju Tinubu said:

“Ogbeni Aregbesola has done a lot for his state and country. He laid the foundation for the infrastructural development of the State of Osun and turned it to what it is today: a modern state.

“He is creative and innovative. He provided inspirational leadership in Osun and now at the centre in Abuja. “An engineer and political activist, Aregbesola made the difference in Lagos as Commissioner for Works and Infrastructure for eight years, in Osun as governor for two terms and at present as Minister of Interior.

“He is resolute and committed to worthy causes. He is bold, courageous and always eager to take decisions that would impart the lives of a majority of our people. “Aregbesola is loyal and dependable. He is someone I describe as my partner, comrade, friend and brother.

“He is an exceptional grassroots campaigner and mobilizer. And he remains valuable to us in APC.