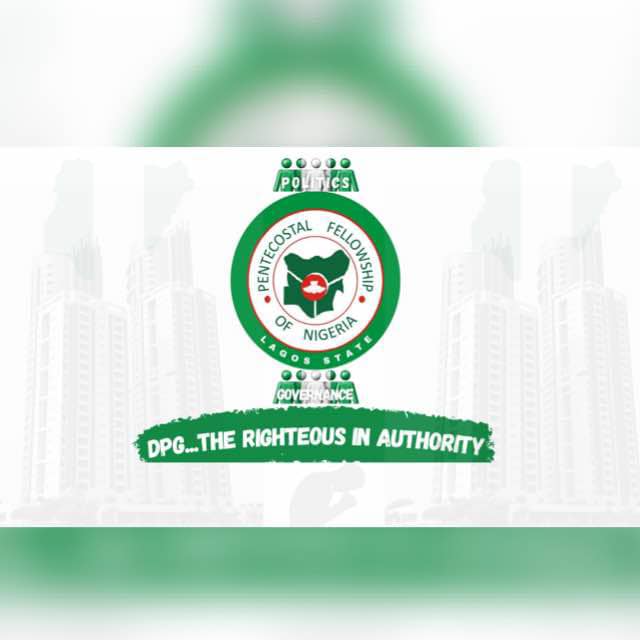 The newly rebranded political wing of the Pentecostal Fellowship of Nigeria(PFN)- Directorate of Politics and Governance on the 20th of April 2022 met with christian Pentecostal aspirants from different parties jostling for political offices at different levels in Lagos.

The Directorate of Politics and Governance, formerly known as Social Security Outreach and Inter-governmental Relations(PFN- SSO/IGR) which organized the meeting, harped on the importance of good governance rooted in the fear of God as the only panacea to current socio-political difficulties bedeviling the country.
In his words, the Lagos State Chairman of Pentecostal Fellowship of Nigeria, Apostle Enyinnaya Okwuonu, noted that Nigeria is in ‘dire need of solution providers’ adequately prepared to navigate the ship of the country out of the prevailing high tides of uncertainty and despair.
He stressed that the DPG moto, which is “Righteous in Authority” must be put in practice for the people to rejoice.

In the same vein, the PFN state deputy, Rev. Oluleke Akinola, also admonished all the aspirants to think beyond next election, but ‘next generation’.
He reminded them to see their aspirations beyond personal ambitions, rather a clarion call for service to humanity.
While charging them to present clear cut agenda that will impact positively, he assured them that the Church is fully prepared to support them with her God-given resources to bring about good governance in Nigeria.
The keynote speaker, Rev. David Esosa Ize-Iyamu, hammered on the need for the aspirants to carry everyone along in their various political parties, towards realizing the goals.
He took them on practical lessons of party politics and the changing dynamics and urged them to put the people first in their quest for political offices.
Some of the aspirants, mainly Christian Pentecostal politicians from APC, PDP, Labour Party, ADC, YPP etc..commended the Church for re-awakening a political arm for good governance in Nigeria.

They promised to reappraise their programmes for high impact and broader inclusiveness.

On his own part, the Lagos State Director-general of DPG, who doubles as Southwest Deputy Director, Bishop Theophilus Taiwo Ajose, released the statistical data of voting Christians and mirrored it down to the Pentecostal Worshipers which has over 60 million eligible voters in Nigeria, according the DPG Voting Data.

He expounded the data to youth population of Pentecostal Churches in Lagos and the silent majority voters DPG have activated with the new structure which is centred at ward levels and local church branches in the state.

The DPG Lagos State Director-general, also displayed the well structured organogram of DPG, from Church Officers of Politics, Ward Co-ordinators, local governments/LCDA, Senatorial Co-ordinators, to the State with their officers in attendance at meeting.

Bishop Ajose said that the Church is now more than ever before, fully ready to harness her teeming population and broad based branch clusters to effect positive change of leadership in Nigeria.

He also charged Christians especially women and youths to ensure they register, obtain their PVC and get ready to cast their vote wisely.