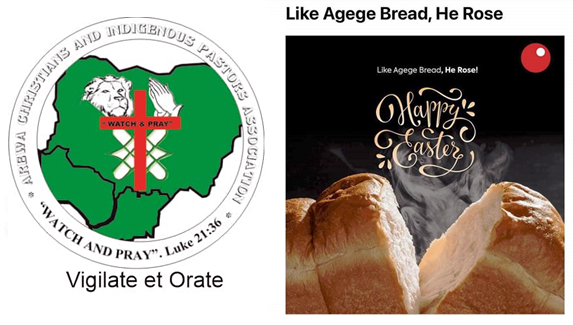 … calls on all Churches, Christian organisations and others who share in the promotion of peaceful coexistence with other faiths to immediately cease transaction with the bank..

… asks if the bank knows what could have happened to them if their action was done to Muslims under the watch of a Christian Managing Director?

… Christians should note that our refusal to act now will permit a repeat against Christians by other organisations or people of a different faith.
To accept this insult from Sterling Bank is to permit the persecution and denials experienced by Christians from some northern states and the federal government to be entrenched in Nigeria’s private sector.

The Arewa Christians and Indigenous Pastors Association (ACIPA) has rejected the apology of Sterling Bank released recently and signed by Abubakar Suleiman, Chief Executive of the bank.

In a press release signed by the President of the association Rev. Luke Shehu, the association said they found the Easter advert of Sunday 17th April 2022 very appalling, disrespectful of Christians and an act of provocation.

‘We, however, restrained ourselves from responding in like manner given the spiritual essence of the Easter period: the memory of the suffering, crucifixion, death and resurrection of Jesus Christ.

‘Let it be on record, the association said, that the humility of Christians concerning Matthew 5:5 should not be taken for granted by your bank, any organisation or the government as is the case in the past.

‘We believe your letter of apology is a public relations stunt; hence it truly depicts mockery of Christianity and Christians. We saw a deliberate gross inadequacy and incompetence on your part.

‘Your statement claiming that “…the message had no malicious content…” and that “…message (the advert) should not have been released to our customers” smacks of hypocrisy and desperate falsehood to assuage the teaming Christians who make up a more significant percentage of your clients.

‘ACIPA does not need to remind you of what the result would have been across Nigeria should this abominable advert by your bank is directed at Muslims during an equivalent Islamic holy period under the watch of a Christian Chief Executive.
[4/21, 10:07 PM] Certified Safety Reporter: ACIPA wishes to remind you that our God, reincarnated in Jesus Christ, is a Lamb as well as a Lion. Therefore, note that we carry the attributes and qualities of our God and father.

‘Since this matter happened, we have been appealing to the emotions and the sensibilities of our fellow Christian brethren not to take actions into their hands in view of your provocative, malicious and misrepresenting advert.

AREWA CHRISTIANS ‘We can not tolerate this insensitivity, recklessness and provocation while at the same time grinning under the yoke of other ills against the Christians and Nigeria in general.

‘Therefore, we call on all Churches and Christian organisations who share in our peaceful coexistence with other faiths to immediately seize any activities with Sterling Bank.

‘We call on all intending clientele to exercise restraints and find other alternatives unless and until Sterling Bank does the needful.

Christians should not take this matter lightly. Our Christian brothers in the South should note if this matter had been the other way round, we Christians in the north would have suffered for it.

‘Our refusal as Christians to act now will permit a repeat of such provocation against Christians by other organisations or people of a different faith.

‘It is evident that our tolerance and complacency, either as Christians or Muslims, have placed us under the scorch we all are in today.

‘ACIPA and indeed all Christians in Nigeria can no longer accept or condone this reckless insensitivity, disrespect, insult, misrepresentation of the fact of our faith and provocation from a financial institution.

ACIPA concluded that the meekness and tolerance of Christians have resulted in disrespect, persecution, abuse, attacks, and denial of rights by individuals, private sectors and indeed government.

‘We are aware that to accept this insult from a financial institution like Sterling Bank is to permit the persecution and denials experienced by Christians from some northern states and the federal government to be entrenched in Nigeria’s private sector as well.