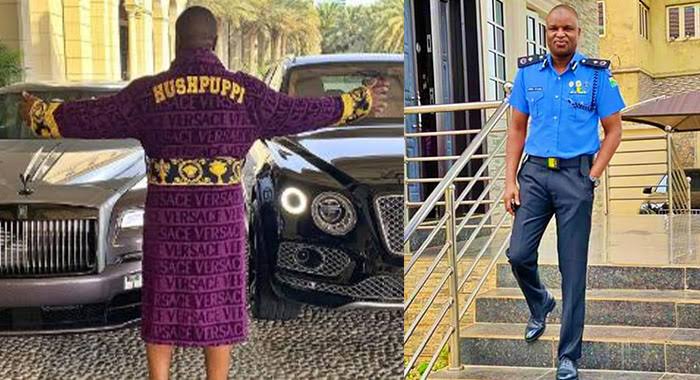 Abba Kyari, the suspended Deputy Commissioner of Police (DCP) facing drug trafficking charges, has begged a federal high court sitting in Abuja not to approve his extradition to the United States to face trial over his alleged involvement with a notorious internet fraudster, Ramon Abbas, popularly known as Hushpuppi.

Kyari, who is currently in prison custody for drug related charges, in fresh processes he filed before the court, alleged that the plan to send him to the U.S. for prosecution, was for the purpose of punishing him.

Insisting that his arrest and subsequent detention had “political undertone”, the embattled DCP told the court that the request to extradite him to the USA was “directed to undermine the crackdown on various crime gangs by the Respondent in Nigeria and internationally”.

Kyari, in a counter-affidavit that was deposed to by his younger brother, Mohammed, maintained that all the allegations pending against him, are not extraditable offences.

“I know as a fact that the specified offences are of a political character and were in fact made for the purpose of prosecuting and punishing the Respondent on account of his race, nationality and was not made in good faith nor in the interest of Justice”, the deponent averred.

Kyari, told the court that he is a highly decorated senior police officer that was already carrying out a “sting investigation” on Ramon Olorunwa Abbas or Abdulraman Imraan Juma, otherwise known as Hushpuppi, before he was framed up and arrested.

“A copy of the letter written by the Respondent to the Interpol on 28th January, 2020 and to the Inspector General of Police on 3rd March, 2020 in respect of the sting investigation being carried out by the Respondent are herewith attached as Exhibit 1a & 1b respectively. This was five months before the arrest of Ramon Abbas and others by the FBI.

“The request for the extradition is not supported by any document or verifiable evidence.

“The request is directed to undermine the crackdown on various crime gangs by the Respondent in Nigeria and internationally and has political undertone.

“The request is for purposes of persecuting or punishing the Respondent on account of his defence for the country.

“The Respondent is confronted with series of charges to break him down because of his achievements and various National honours. A copy of the charge framed against the Respondent by the NDLEA is herewith attached as Exhibit 2.

“The offences are trumped up and the Respondent is seriously committed to defending himself.

“The Application for extradition processes clearly shows allegation of crimes committed on Nigeria soil. A copy of the alleged charge framed against the Respondent by the US Government is herewith attached as Exhibit 3.

“The Respondent has undergone administrative inquiry which is still ongoing and has not been completed to date on the same matter.

“The Respondent is a Deputy Commissioner of Police in the employment of the Nigeria Police who is highly decorated with meritorious service/excellent awards for outstanding service to the nation and has nowhere to run to.

“The Respondent has equally been decorated by the US Authorities.

“Having regards to all the circumstances thereof, it will be unjust, oppressive and improper to surrender the Respondent to the USA.

“The instant case has failed this test. We will rely on the list of Treaty. Equally, there is an ongoing criminal trial against the Respondent in FHC/ABJ/CR/57/2022, which the Applicant failed to disclose.

“Finally, the Respondent submits that the Applicant’s request concealed the ongoing criminal proceedings against the Respondent and it will prove that on the merit, this application is deserving of being dismissed and the Respondent to be discharged accordingly for the above and other reasons herein”, he added.

Enumerating some of his achievements in the police, Kyari told the court that he was awarded a Presidential medal for courage on April 1, 2016, “three times IGP Commendation for Courage for years 2012, 2013 and 2014, two times recipient of NPF Gold Medal, three times Governor‘s Commendation Medal for Courage & Excellence by the Lagos State Government for years 2011, 2012 and 2013, Award for Outstanding Service to the Nation by the National Assembly (House of Representatives) 2020 and over170 more awards that are too numerous to mention.

“The Respondent has been involved in several national assignments and has in the course of his assignments made many foes.

“The respondent has received several international awards and honours including United States of America where he received Commendation Award from the FBI for rescuing Americans kidnapped in Nigeria, arresting the kidnappers and arrest of murderers of a serving American soldier killed in Imo state”, the counter affidavit further read.

However, the Federal Government, through the office of the Attorney-General of the Federation and Minister of Justice, Mr. Abubakar Malami, SAN, in its own affidavit that was deposed to by one Bello Abubakar Sholadoye, said it has sufficient evidence to warrant Kyari’s extradition to the U.S. for trial.

It told the court that the office of the AGF, “was in receipt of Extradition request vide a diplomatic channel for the extradition of the Respondent fugitive wanted to stand trial in the USA.

“That the AGF is satisfied that there is no bar to the extradition application”.

FG, argued that Kyari’s ongoing trial for drug trafficking would not stop the court from approving his extradition, stressing that surrending him to the U.S. government could be postponed by the AGF till the conclusion of his trial in Nigeria.

“In conclusion, this Honourable Court is respectfully urged to resolve that the Applicant has placed suffficient material before this Honourobte Court to grant the application for extradition order and the extradition of the fugitive and his remand to await the Surrender Order of the Honourable Attorney-General of the Federation at determination of the criminal charge against him”, FG added.

The court said it would take both the objection and the substantive suit together.

Kyari is wanted in the U.S. to stand trial for conspiracy to commit wire fraud, money laundering and identity theft.

A grand jury had in April 29, 2021, filed an indictment against him with the approval of the U.S. District Court for the Central District of California, after which a warrant was issued for his arrest.