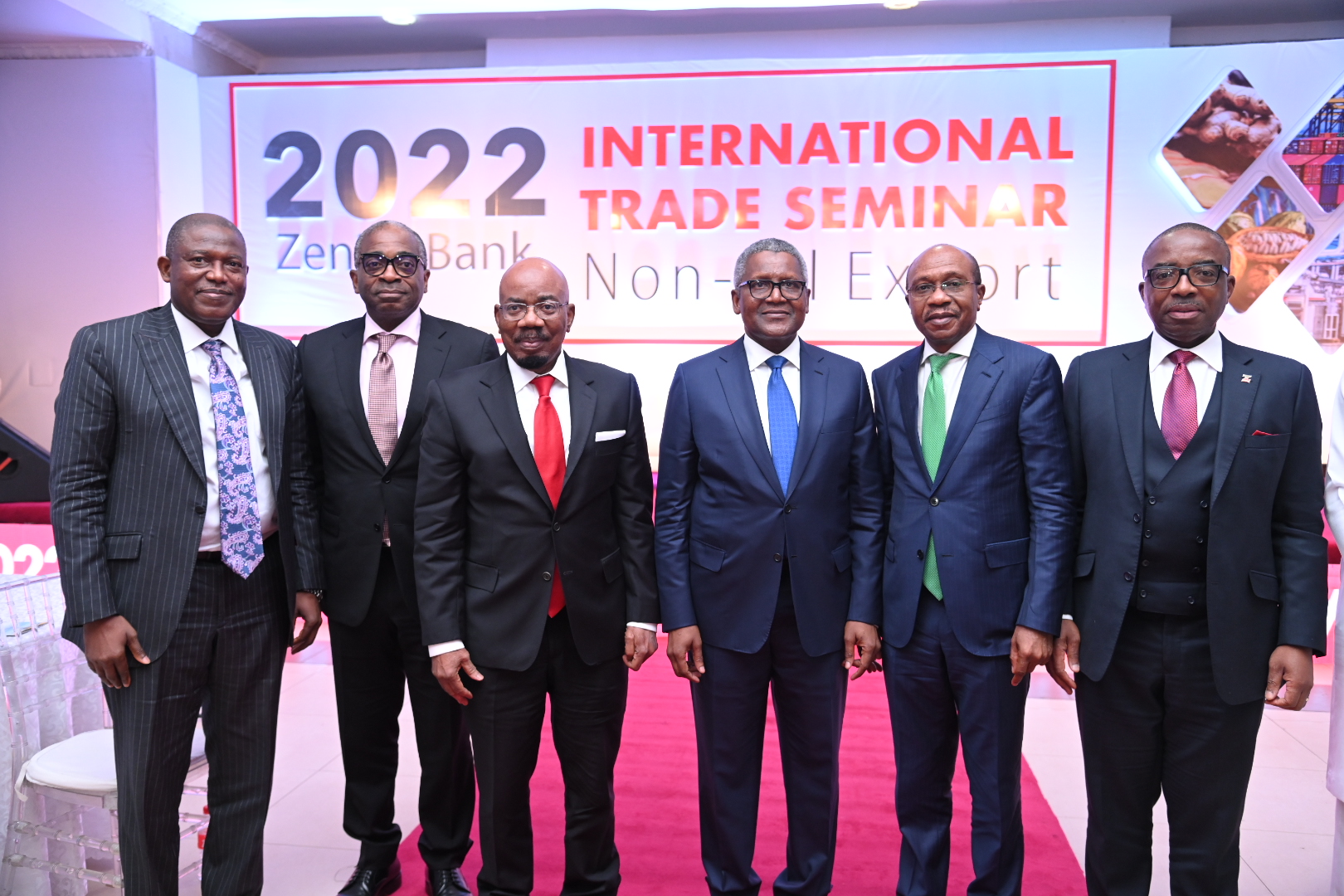 In his Goodwill Message Presentation, the Founder and Chairman of Zenith Bank Plc, Mr. Jim Ovia, CON, called for a concerted effort towards diversifying Nigeria’s export base through the promotion of non-oil exports. Highlighting the importance of non-oil export to the nation’s economy, Ovia pointed out that Nigeria exported cocoa and several other non-oil products for years before oil was discovered. He cited the example of the 25-storey Cocoa House in Ibadan, which was built with proceeds from cocoa exports. He pointed out that many countries in the world, such as Japan and China been successful because they are doing a great deal of innovation, production and manufacturing of goods and services.

According to him, we should also look at promoting the nation’s non-oil export sector through technology to create technological giants like Apple, Tesla, and Google. And we already have technology companies in this mould in Nigeria, such as Flutterwave, which has a valuation of $3 billion, making it more valuable than some banks in Nigeria. Speaking further on the enormous potential in Nigeria’s non-oil sector, Ovia highlighted the phenomenal growth of Nigeria’s emerging financial technology (Fintech) companies such as Flutherwave, OPay, Interswitch, Kuda and Paystack, with market valuations of $3 billion, $2 billion, $1 billion, $500 million, $200 million, respectively.

According to him, this underscores the enormous opportunity in the Fintech space. He also noted that the most capitalized companies in the world, such as Apple, Microsoft, Alphabet (Google), Amazon, Tesla, Visa, etc., are not oil companies but are in the technological innovation space.

In his welcome address, the Group Managing Director/CEO of Zenith Bank, Mr. Ebenezer Onyeagwu, said that the annual Zenith Bank Trade Seminar has served as a veritable platform to deepen the conversation on promoting non-oil export in Nigeria, bringing together non-oil export practitioners and relevant government agencies to interact and explore the opportunities and proffer solutions to the challenges of non-oil export in the country.

Speaking on the origin of the Zenith Bank Annual International Trade Seminar, Onyeagwu said that the commodity price slump of 2014-2016 was a watershed moment. According to him, “when crude oil prices plummeted from $114.55 per barrel in June 2014 to $28.76 in January 2016, with an attendant effect on the availability of foreign exchange, it was time to look towards the non-oil export sector for a more sustainable source of foreign exchange that is not susceptible to external shocks and price volatility.

Highlighting some of the salient outcomes of the past six Zenith Bank Annual International Trade Seminar editions, Onyeagwu noted that previous editions’ outcomes have found expression and influenced policy initiatives. For instance, the extension of the period of repatriation of Non-Oil Export proceeds from 90 days to 180 days and the policy mandating shippers not to carry export without a Nigeria Export Proceeds (NXP) Form Number were recommendations from previous seminars.

Also, the need to incentivize exporters to repatriate their export proceeds through the official channels and the recommendation to create export terminals across various export hubs in the country were also from past seminars. Also, previous editions recommended having Export Desks in commercial banks, which has now been instituted. He also stated that Zenith Bank has trained over 100 exporters through its Zero to Hero programmes which provide a platform for grooming and exposing beginners to become strong exporters by providing training on documentation, product sourcing, access to market and financing. He noted that Zenith Bank will continue the advocacy of promoting non-oil export.

Delivering his goodwill message, the Central Bank of Nigeria Governor, Mr. Godwin Emefiele, CON, commended Zenith Bank and its leadership led by the Founder and Chairman of the Board, Jim Ovia, for its laudable initiative in organizing an annual export seminar to explore opportunities in Nigeria’s non-oil export with a view to increasing the nation’s non-oil export base and ultimately increasing its share as a percentage of total export.

In his words: “This is why the theme of this year’s seminar “Unlocking Opportunities in Nigeria’s Non-Oil Export Business” is timely and appropriate. This is because the global economy and structure are changing rapidly before our eyes. The previous world economic order underpinned by globalization and seamless trade possibilities seems to be suffering major disruptions lately. We believe Nigeria has a lot of potentials, and we can harness this for the good of our people and country.” He pointed out that the CBN has undertaken several initiatives to promote the non-oil export sector because of its firm belief that the non-oil export sector holds enormous potential to contribute to employment generation, wealth creation and economic growth of the country.

In his keynote address, the President & Chief Executive of Dangote Group, Alhaji Aliko Dangote, GCON, said that “Nigeria’s non-oil export is quite low compared to other African top oil producers. This exposes the economy to oil price/production risks. There is much room for growth, and the CBN is helping drive this through the RT200 programme”. According to him, the CBN RT200 FX programme, which aims to achieve $200 billion in foreign exchange earnings from non-oil proceeds over the next 3-5 years, has very laudable objectives, including enhancing foreign exchange inflow, diversifying the source of FX inflow, increasing the level of contribution from non-oil export, and ensuring stability and sustainability of FX flows.

According to him, the Pan-African Payment and Settlement System will make it easy and seamless for Africans to trade amongst themselves and receive payment for goods and services in their local currencies, eliminating currency conversion challenges. Zenith Bank remains committed to promoting the non-oil export sector in Nigeria by identifying emerging opportunities which help stimulate non-oil exports and develop robust financial products and incentives for operators in the sector. The bank launched the Non-Oil Export Seminar in 2017 as an initiative to deepen the discourse on promoting the non-oil export business in Nigeria.