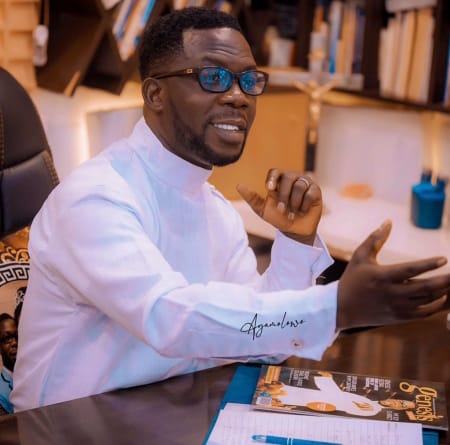 LAGOS – In a recent youtube video, shared online, Prophet Isreal Ogundipe, a.k.a Genesis, spoke about how the two other major tribes in Nigeria, (Hausa and Igbo), are showing strong supports to their kinsmen, while the Yorubas are condemning their own kinsman.

Genesis also wondered why Yorubas always despised, antagonised, mock and sacrifice their kinsmen at every opportunity because of personal aggrandizement.

To buttress his point, “Genesis” at one of his recent service, called a female member of his congregation who is of Igbo extraction and asked her who she will vote for as President during the coming elections, and without micing a word, the woman replied, “it is Peter Obi.”

To the cheerful delight of the whole congregation, the Man of God’s graphical illustration and the Igbo woman’s response perfectly illustrated the point Genesis was driving at, and he commended the woman for speaking the truth.

Prophet Ogundipe however expressed his unwavering support for the APC presidential aspirant, Asiwaju Bola Ahmed Tinubu, and his desire to vote for the astute politician in the next year presidential election, basically on the ground that he is a fellow Yoruba man.

He noted that since he wasn’t a bastard who will abandon his own kinsman like other tribes do.

Genesis further stressed that his motivation and desire to support and vote for Asiwaju Bola Tinubu was predicated on the fact that he feels it is the turn of a Yoruba person to direct the affairs of the country.

He urged the youths and the elders to desist from selling their votes, but vote for the right candidate that can positively turn the situation of the country around for the benefit of all.

He reiterated his staunch belief in the APC leader – Asiwaju Bola Ahmed Tinubu while he advised journalists and others who might want to twist his message to have a rethink, saying their tantrums and dissuasive antics have no effect on him.

Sounding a note of warning, Genesis advised betrayers of the Yoruba extraction to have a rethink and support their own BAT towards his quest to become the next President of Nigeria in the coming presidential election.

Genesis lamented on the hardships Nigerians are now experiencing in the country while he made a clarion call for unity and progress of the Yoruba race to change the situation for better in Nigeria.

It’s sad to note that some disgruntled elements have been inventing malicious devices to twist the sincerity and sense of reasoning of the prophet of God.

In spite of the audio-visual quality and clarity of the video, its annoying to see some evil-minded people still found it very difficult to comprehend the simple message of love for his kinsmen as being demonstrated by other tribes in the country.

Besides, the Man of God wasn’t given any inducement to speak good or support Asiwaju Bola Ahmed Tinubu, and his party.

It would be recalled that Prophet Ogundipe in the video clip reiterated that he never requested nor received any bribe from any politician.

*Oluwaseun Fabiyi is the Media Aide to Prophet Isreal Ogundipe, aka Genesis.