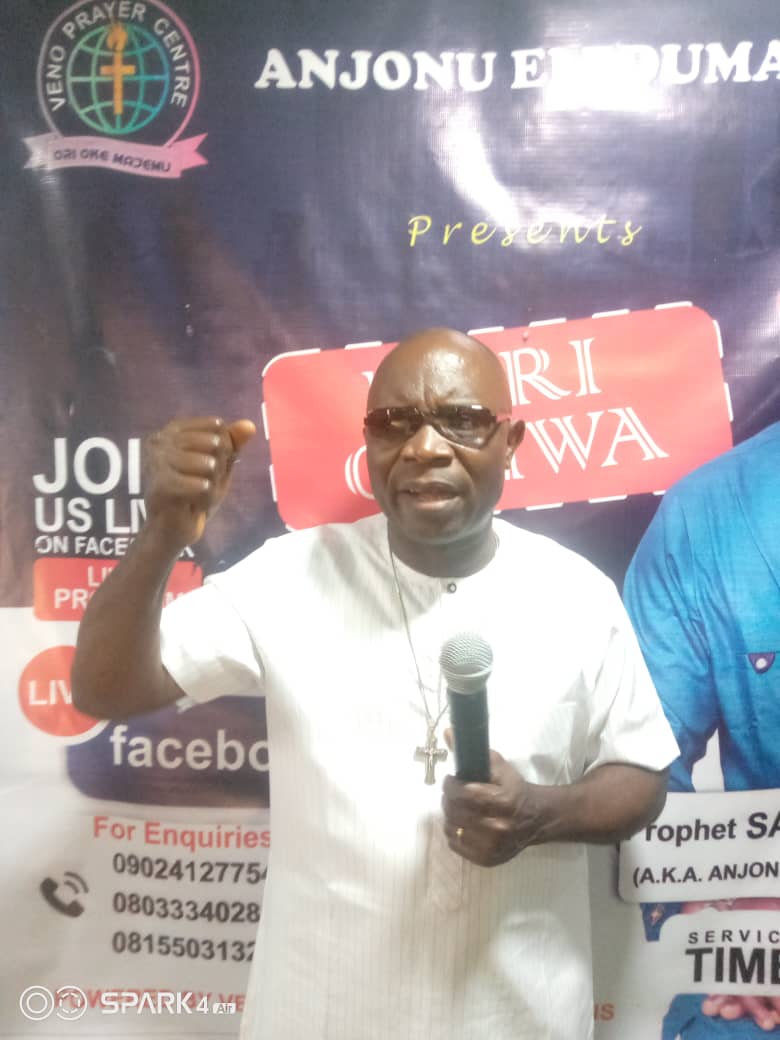 The emergence of Prophet Sanya Ojo, Anjonu Eledumare was not fleshly designed, it was designed by the Almighty God. As a journalist and a social critic, he felt reluctant to answer the call but when confirmed by different men of God, he left with no choice than to pick the call.

Below are the names of the God’s Generals who attested to his calling:

In 1994, Prophet TB Joshua of a blessed memory- founder of Synagogue Church of God ministry, saw his anointing from God, but then, as a journalist, he honoured him with Fresh Leadership Award without an intension of becoming a Prophet. May his soul rest in peace.

Another man of God who saw the coming of this gospel is Late Prophet Duromola Adedayo Samuel, the founder of Christ Worshippers Church, Warri, Delta State, Nigeria. He revealed that he saw the anointing of God in him during his life time that was when he wrote a book on him titled “A Lonely voice in the wilderness”. We are together for not less than 15years before he ascended…he lives on..

Primate Elijah Ayodele, the founder of INRI also saw it coming, he proclaimed, “forge ahead in the vineyards because I saw light of God in you” he revealed. And since then he has been supporting him financial, morally and spiritually.

Similarly, Pastor F.E Bamiduro, the founder Thy Word Is Life Ministry Lagos, Nigeria, also saw the anointing of God in him. He also has been supporting him physically and spiritually in the vineyard..

Apostle Aderibigbe, the founder Calvary Apostolic Deliverance Evangelism Ministry (CADEM), revealed that the collar on his neck is big and the anointing of God in him is flowing ceaselessly.
It didn’t stop there, Prophet Christopher Omotayo, a.k.a Baba Majemu, the founder CCC Majemu Oluwa Parish is one of those Prophets who saw the anointing in him coupled with the berthed of a Publication (Veno International Magazine) During the first year anniversary of Veno Prayer Centre a.k a Ori Oke Majemu, he graced the occasion and he was honoured
Others are Prophet Timothy Bayode (Baba Agbara Oro), Evangelist Olukayode Oladejo, Pastor Adewunmi Oyebode, Pastor Bello, Pastor Alexander Akinpelumi, Woli Kayode Olorunjuedalo, Prophet Adeoye Zacheaus, Prophet Prophet Gbenga Akingbolu ( Igbedide Theological College), and Dr.Segun Folorunsho just to mention a few saw the coming of Veno Prayer Centre .

No wonder Prophet Sanya Ojo a k a Anjonu Eledumare has been performing wonders in the vineyard, healing the sicks and liberate those in bondage within two years.
His birth was mysterious and God’s anointing his upon him right from the birth.. Consequently, as a result of this calling, all his three vehicles were dashed out based on instructions from God- he obeyed and served Him..
As a God’s General, Prophet Ojo has the license to deliver, spiritual kills and spread the gospel across the globe

Within two years in the vineyard, those seeking for fruits of womb received, those denied of visa received and travelled abroad.. Those on sick beds receive their healings
Recently, God instructed him to start a live program on Facebook, and the Maiden edition ILERI OLUWA trending on the internet and will be live every Tuesday, 10am

On Prophecy…….
Many of his prophecies has Hit Target. In 2015, he said Jonathan will lose the election and was mentioned in radio continental programmed anchored by Bukola Ajiboye.
And shortly after the election, God revealed the administration of Buhari’s government when he saw him soaked Gaari and groundnut that translated to hardship. .What are we experiencing now? Hardship..
God has also revealed Tinubu’s stand on 2023 election In a trance, the man of God saw him at the back of a seized truck waving his hands before he signified intentions to contest, ofcourse, he contested the primary and won the ticket as APC Candidate’..
Recently, he saw him asking an Hausa man, a shoe shiner to dust his shoe he gave him #10k new notes and was rejected which means, the Northerners would reject him.
He aslo saw him (Tinubu) coming out of his fruit farm sweating..The road to 2023 may be toughed for him..

On Atiku…….
The man of God recently saw him in a trance and brought 3 items such as bread, vegetable and woman’s wave on, Good tidings